Take note. More than 60% of searches are now being done from mobile devices. The result of you searching “Italian Restaurant Near Me” will result in the 3-Pack displaying at the top of the page. Think about it.

I provide this service completely free.

There is no obligation to sign up for any other service. You ask, why does Frank do this for free? The threat of GMB Account piracy/theft has increased over the past couple of months. I wanted to share with you a short story that has everything to do with the importance of claiming your GMB listing.

Last month, we had a business owner calling frantically and asking for help. He was desperate to get assistance after he discovered that someone had stolen his GMB business listing.

Yes, you read that one right… It’s entirely possible for someone else to claim the GMB listing of your business – if you leave it unclaimed for too long.

Keep in mind that GMB claiming is an entirely automated process. This means that anyone can obtain the ownership rights of your GMB listing.

But back to my story…

So this guy is rightfully the owner of an Italian restaurant chain in Texas. In total, he has 4 locations which are listed on his presentation website.

His mistake was that he left all his GMB listings unclaimed for a couple of years. After attending a local business conference, some business owners encouraged him to start using Google My Business to attract more local customers to his establishments.

As you might have figured out by now, his listing was already claimed by someone else. Even more, the thief was actively responding to his reviews in a hateful manner – he was arguing with every client that was leaving a review.

He told us that he was on the phone with Google’s Fraud Department for days now, but the issue has still not been resolved.

In the end, we signed him as a GMB Recovery client and took over communications with Google. But this just goes to show how important it is to claim your GMB listing as soon as possible.

It can save you from tons of problems along the way…

If you decide to start paying attention to the GMB listing of your business, contact me through this form and we’ll put together a plan.

This is an example of the GMB (3-Pack) showing Insurance Agents near Wichita KS.

The first listing is a paid ad. 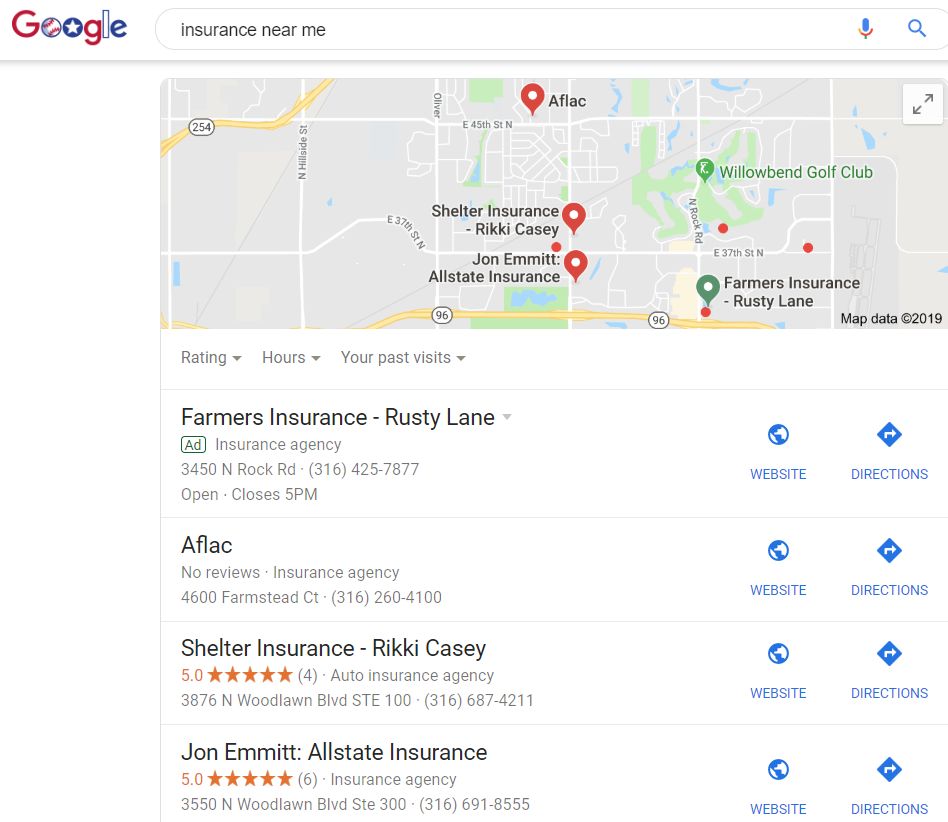 Google will typically verify your account ownership by one of 3 methods. Here are descriptions for each from Google’s GMB page.

Verify a business listing by phone (available for select businesses)

If your business is eligible to get a verification code by phone, you’ll see the Verify by phone option when you request verification.

Verify a business listing by email (available for select businesses)

Not all businesses can verify their listing by email. If you don’t see this option, try another verification method.

Before trying to verify your listing by email, make sure you can access the email address shown in the verification screen.

If you’ve already verified your business’s website with Google Search Console, you may be able to verify your listing instantly.

To verify your business listing instantly, make sure you’re signed in to Google My Business with the same email account you used to verify your site with Search Console. Some business categories may not be eligible for instant verification.

This form will send your information to me in order for me to claim your GMB for you.
Fields marked with an asterisk (*) in red are required to send.
Note: Your email address and information will never be shared for any purpose by me.